Simply Explained: What is bitcoin?

Before we jump on to talk about Bitcoin, let’s first talk about money. What is money exactly? In literal terms, it is a medium of exchange that represents value. If someone provides you any service, you pay him/her in exchange for the value you received. Then that person will further buy something of value from someone else. And the chain of exchange goes on and on.

Throughout, history, people have used different materials to represent money as a medium of exchange such as wheat, salt, rice, and most famously gold. However, for anything to represent value people needs to trust that the exchange is valuable and will stay valuable in the future as well.

Today, money is centralized and worthless because the prices are rising but the purchasing power of people is dropping. Additionally, the amount of physical money in the world is almost negligible and with time it might become obsolete. Over the years, we have moved from fiat money to digital money such as credit cards, wire transfers, PayPal, and others. And now we have cryptocurrencies like Bitcoin to look forward to.

Learn more >> What is a cryptocurrency?

In this article, we will talk about what is Bitcoin and how does bitcoin works.

Bitcoin is a decentralized type of digital cash that aims to deal with the problem we have with paying for things online. Everything we buy today must go through a bank or credit card company that deducts a cut of a transaction. Such mediums are based on trust that our card company or bank will keep our details safe. Previously, many people have tried to work out a system that can eliminate the requirement of a middleman to make purchases. However, no such system was proved to be effective.

In 2008, Satoshi Nakamoto, an anonymous programmer offered a solution. On a popular cryptography blog, he left a paper proposing a system of currency that could solve all these fiddly problems. He suggested that instead of banks or credit card companies recording every transaction in a central ledger, all the individuals using the system would record the transactions at the same time. As a result, any attempt to scam a person would be noticed and the transaction would be rejected.

Governments, banks, or any individuals would not have the power to control the flow of the currency nor they would incur any fee on the payments. Moreover, it will help in spending money across the borders in a much quicker, cheaper, and easier way.

How does Bitcoin work?

Bitcoin only exists online; it is stored in a digital wallet in the form of a computer file. The transactions are done on this digital wallet and every transaction is recorded in a distributed ledger called a blockchain. The ledger helps in keeping the track of Bitcoins to prevent users from spending coins they do not own, undo-ing transactions, or making copies of the coins.

Since its public launch in 2009, the value of bitcoin has risen dramatically. As of April 19, 2021, the value of Bitcoin was recorded as $57,231.05 (Source: coinmarketcap). Due to limited supply, the prices are going to rise with time, especially as more institutional investors and industry giants are treating virtual currency as a sort of digital gold to hedge against inflation and market volatility. 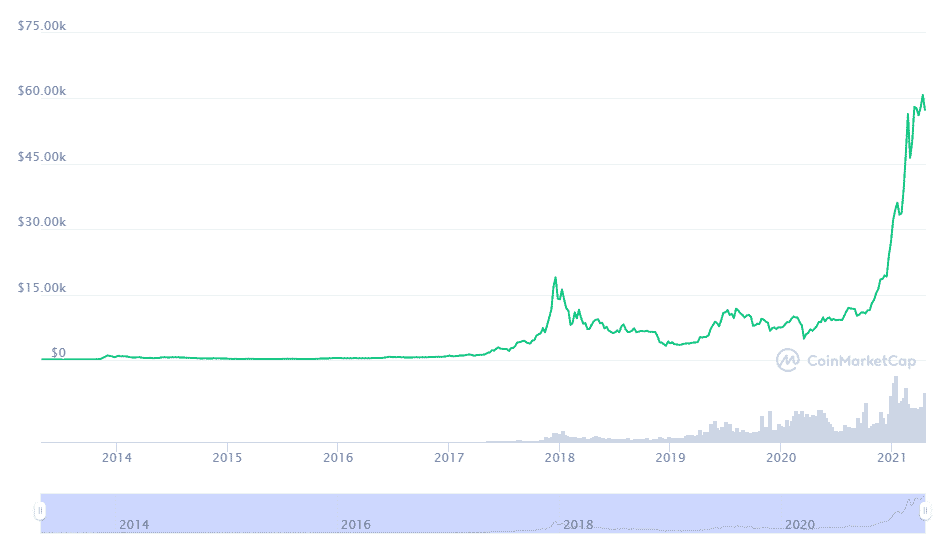 New in investing? 5 reasons why you should invest in bitcoin

How to buy Bitcoins

How to use Bitcoin

In the United States, people invest in Bitcoins as an alternative to diversify their investment portfolio. Currently, companies like Microsoft, Wikipedia, AT&T, Overstock, and Twitch accept bitcoins. Additionally, some vendors accept bitcoins that allow you to pay for goods and services.

Should you invest in Bitcoin?

For many people, the important question is, is it worth investing in Bitcoin? Many financial experts support their clients’ wish to buy cryptos. However, they do not recommend it until the client is interested in buying because the market is still growing.

Bitcoin can be used as a side investment to keep the portfolio diverse and hedge against traditional instruments such as stock and bonds. Moreover, the world is becoming more technologically advanced, and investing in Bitcoins or any other cryptocurrency is investing in the technology that could be the future of currencies.

Final Thoughts: What is Bitcoin?

Bitcoin is the 21st century’s biggest technological breakthrough that aims to solve issues of online payments by offering full ownership of the currency and its flow. We hope that after reading this article you know more about bitcoin and might be thinking to be part of the Bitcoin community.

if not, you can still be part of the discussion related to Bitcoin and provide your well-informed opinion.

If you have enjoyed reading Simple Explained: What is Bitcoin? Please make sure you check out some of the other articles on cryptocurrency, and Bitcoin here.

How to Invest in Real Estate What is real estate? Real estate can be defined as land and everything that is permanently attached to it,...

June 2, 2021A Bitcoin Glossary for Beginners

Bitcoin is the largest cryptocurrency of the 21st Century. It provides a revolutionary approach to payments. Digital currency has been around for 13 years now....

March 24, 2021How to effectively dispute a credit card chargeback?

A chargeback is a protection tool that helps cardholders from losing money due to fraudulent charges, or unauthorized transactions, or faulty purchase orders. Before we...